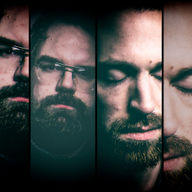 Bishop / Breistein is a Norwegian duo consisting of John Derek Bishop (live-sampling) and Inge Weatherhead Breistein (saxophone). They released their first album "Mind Vessel" on Jazzland Recordings in 2018 and it received good reviews in Germany, Norway, England and USA. They released their second album «Ro» in 2022 on Jazzland Recordings. Since their first album they have toured in England, Germany, Poland and Norway.

The music has an electronic-experimental sound and refers to genres such as electronica, nordic jazz, ambience and minimalism. Compositions and larger improvised sections blend together through rhythmic repetition, harmonic textures, ambience and strong melodies.

A majority of the sound is live-samples by Bishop and manipulated on the spot, creating a very live and fresh concert. Bishop records Breistein´s saxophone with various software and hardware and transforms the sound into something new.

John Derek Bishop (alias Tortusa) is a Norwegian-American electronic musician and producer from Stavanger, Norway. He has released five albums on Jazzland Recordings and was nominated for the Spellemann Prize (Norwegian Grammy) for his solo album «I Know This Place». The albums har received good critics in the magazines Mojo, Prog Magazine, og Future Music. Bishop has collaborated with artists Arve Henriksen, Eivind Aarset, Jan Bang, Erland Dahlen, and more.

Inge Weatherhead Breistein is a jazz saxophonist, electronic musician and composer from Bergen, Norway. He works with various kinds of electronic music, jazz and improvisational music, and he often mixes these three together. He has released music on labels such as Jazzland recordings, NORCD and AMP music and records.